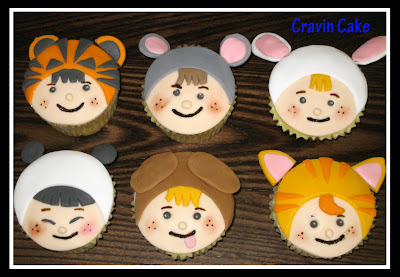 So for my first post I'm showing some cupcakes that I made to take to work for a baby shower morning tea, hence the theme I chose. Now I received as a present late last year the fantastic new Planet Cake Cupcakes book by Paris Cutler which this design comes from. I so wanted to make the santa's crew cupcakes in December, but did not have the time to spare...I'm hoping that with lots of time to plan I will achieve it this year :-)

But back to babies these were the first complicated cupcake design I have attempted and I was pleased with the result. I made the vanilla cupcakes recipe from the book, topped them with white chocolate ganache, then covered with fondant decorations. I must say if I had realised how much time they would cut out of my precious sleep late one night, I may have stuck to only two of the designs. But now I am glad I went to the effort.
P.S I do think it was worth making them all as they are so damn cute! - especially the little panda

These cupcakes are a really good vanilla cake that taste delicious and go well with white chocolate ganache. The only thing I find is they can sometimes rise to quite high domes, but that's easily fixed by chopping the domes off and popping them in my mouth! 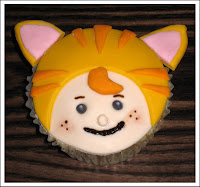 1.   Preheat oven to 180°C. Cream butter, sugar and vanilla together until light in colour
3.   Beat the eggs in one at a time
4.   Add half the flours and half the buttermilk and fold in by hand (or mix on low speed)
5.   Fold or mix in the remainder of the flours and buttermilk.
6.   Spoon mixture into cupcake cases and smooth down top of mixture. Bake for 20-25 minutes until skewer comes out clean
7.   Allow to cool completely before icing

1.   Place chopped chocolate and cream in a heavy based saucepan over very low heat and stir constantly until the chocolate is half melted
2.   Take off the heat and continue stirring until completely melted and ganache has come together
3.   Allow to cool until spreadable consistency, then spread a smooth layer over the top of completely cool cupcakes

*Ganache can also be made in a double boiler or in the microwave. Just be careful not to burn the chocolate

The detailed and easy-to-understand instructions for the animal baby suits are in the Planet Cake Cupcakes book. I used white fondant which I coloured to the required colours, then used circle cutters, a small knife or just my hands to model all the decorations. The little ears were made separately and attached with dried spaghetti!